BEIJING, Oct. 30, 2020 /PRNewswire/ — Nanjing Jiangbei New Area, a state-level new area in east China’s Jiangsu Province, released a book introducing its innovation practices and cases since its establishment in 2015, aiming to provide reference for the innovative development of other national new areas in China on Tuesday. The book, jointly released by the management committee of Nanjing Jiangbei New Area and China Economic Information Service (CEIS), presents innovation theories and cases based on survey into 30-odd high-tech enterprises, R&D institutions and industrial development platforms, and 10 plus experts and business representatives, according to Chen Xixi, director of the Jiangsu center of CEIS.

Over the past five years, a large number of talents have been attracted to settle in the new area for innovation and entrepreneurship, said Li Xiaochun, deputy director of the science and technology innovation bureau under the management committee of Nanjing Jiangbei New Area.

The new area has attracted talents from dozens of famous universities such as Tsinghua University and Peking University and nearly 100 sci-tech innovation platforms and engineering technology centers. Meanwhile, it has grown over 2,000 talents in various fields, including two Nobel Prize winners and 58 academicians.

To participate in the building of a modern industrial agglomeration area in the Yangtze River Delta, the new area has been focusing on constructing a city of chips, a city of gene technology and a new financial center.

The city of chips has become home of 400-odd integrated circuit enterprises, whose main business income grew 68 percent year on year in the first half of 2020. It’s expected that the industry’s total output value will exceed 50 billion yuan this year.

The city of gene technology has gathered 800 plus health enterprises, while the new financial center has hosted over 400 funds with a total capital of 500 billion yuan.

On its way to make itself a magnet for innovation, Nanjing Jiangbei New Area has strengthened its competitiveness and business environment. Its GDP hits 278 billion yuan in 2019. 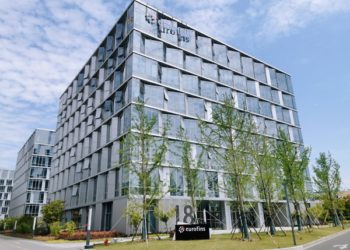