Ringgit is fourth most undervalued currency in the world KUALA LUMPUR – The Malaysian ringgit should be worth 58.9% more against the US dollar, or RM1.72 per dollar, instead of its current level of around RM4.19, according to the latest Big Mac Index recently released by The Economist.

Since 1986, the Big Mac Index has been comparing purchasing powers around the world using the price of the world’s most recognisable burger as its benchmark.

The index is based on the theory of purchasing-power-parity (PPP), or the notion that in the long run, exchange rates should move towards the rate that would equalise the prices of an identical basket of goods and services in any two countries.

The index, which the Economist says is not to be taken as a precise gauge of “currency misalignment”, has now been globally accepted.

In its latest edition, the ringgit emerges as the fourth most undervalued of 55 currencies tracked, each measured by GDP per capita and after taking into account differences in the standard of living.

“The implied exchange rate is 1.72. The difference between this and the actual exchange rate, 4.19, suggests the ringgit is 58.9% undervalued,” it added in reference to the ringgit’s market value earlier this week.

What this means is that anyone who earns in ringgit will be able to buy fewer things in the US or any other country because the currency is undervalued. 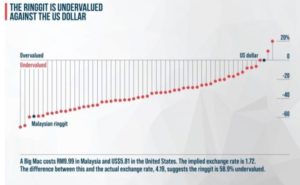 But the ringgit is not alone.

Meanwhile, the index finds the Swiss franc and the Norwegian krone as the world’s most overvalued currencies.

The raw index does not tell the full story of currency valuation.

Due to PPP, the cost to produce a Big Mac is cheaper in poorer countries.

To address this, The Economist said it has factored in another important indicator – GDP-adjusted index – to reach a more accurate conclusion.

But based on differences in GDP per person, a Big Mac should cost 37.2% less.

This suggests that the ringgit is 34.6% undervalued.

On the adjusted index too, Malaysia’s currency remains heavily undervalued at sixth place, but less so than when dealing with straight conversion data.

Will the Year of the Water Tiger Bring Fortune for You? Seven Key Investment Themes For 2022 And Beyond